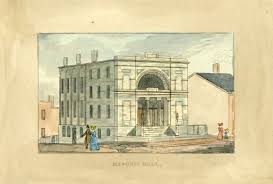 On this month of May in 1843, fifteen Grand Lodges sent representatives to a convention in Baltimore, Maryland to discuss the possibility of forming a national Grand Lodge and unifying the Masonic ritual of the American Grand Lodges. At this time, the Morgan Affair had taken its toll on membership and the outlook for Freemasonry in the United States was bleak. Ever the staunch traditionalists of the Masonic world, the Grand Lodge of Pennsylvania refused to participate in this conference. Several more attempts to unite the American Grand Lodges occurred in succeeding years, but Pennsylvania never sent delegates and remained a bastion of independence throughout the movement. (Source: A Pennsylvania Masonic Handbook: The Personal Ahiman Rezon)