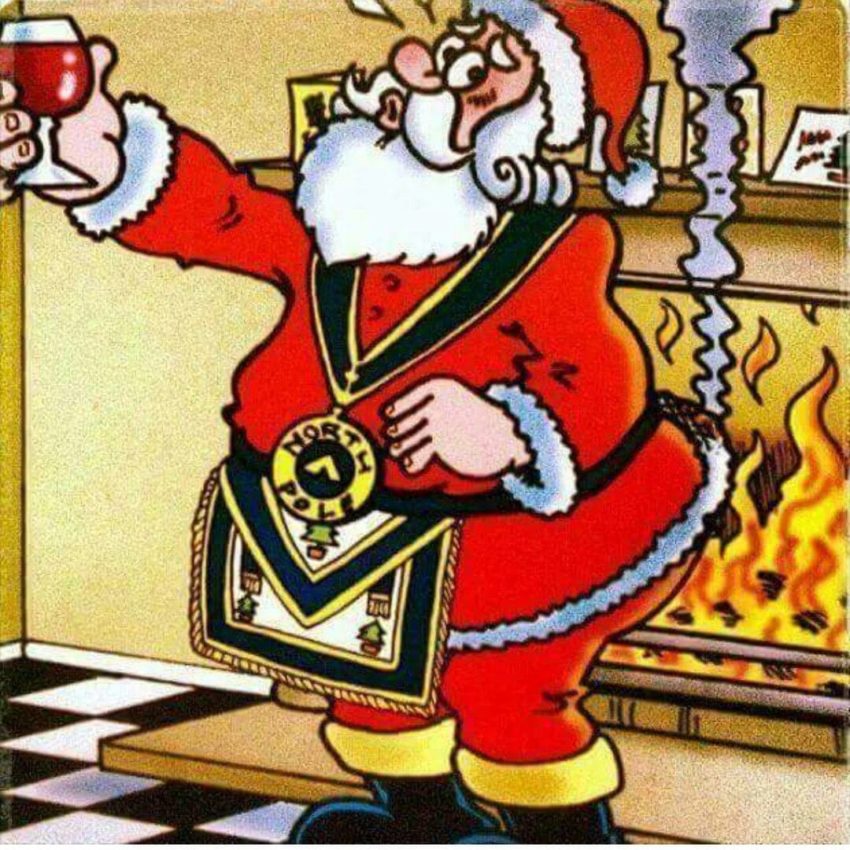 ‘Twas the Night before Christmas, and down at the lodge
not a gavel was stirring, and in the hodge-podge.
Of aprons and jewels and chairs East and West
You could savour the silence, most gladly divest
All metal and mineral, it mattered not,
Since Christmas was nigh and the coals were still hot.
In the hearth of your home place, all Masons abed,
As visions of trestle boards danced in their head;
When up on the roof there arose such a clatter
Our Tyler jumped up to see what was the matter!
He picked up his sword and ran fast to the door,
Three knocks shook the panels – he wondered ‘What for?’
He answered the knocking with raps of his own,
And once the door opened he saw, with a moan
Of delight it was Santa, all jolly and red
Except for one notable feature instead!
Upon his large finger he wore what we knew
Was compass and square on a background of blue!
‘Why Santa!’ he shouted and lowered his blade,
‘I see you’re a Mason!’ the Tyler relayed.
He looked toward the Master’s most dignified chair
And said, voice near trembling, ‘Most Worshipful there
Is a Gentleman properly clothed at the gate!’
The Master replied, ‘Let’s allow him – but wait!
You tell me a Gentleman, but I don’t see
His Apron beneath that red suit, can it be
Our visitor hasn’t been properly raised?
Must we offer a test that is suitably phrased?
‘I do beg your pardon,’ ol’ Santa said quick
As he pulled up his coat and displayed not a stick
But a cane with engraving, two balls did appear
And oh, what an apron, he wore and held dear!
Adorned like the Master’s, complete with a sign
Of “Lodge Number One, the North Pole” on one line!
“Now let this man enter,” the Master declared,
And once in the Lodge room, the Brethren all stared,
For Santa was wearing a jewel not seen
For many a century – there in between
The fur of his coat and the splendid red collar
Gleamed two golden reindeer that shone line a dollar!
“It’s Donner and Blitzen, who I must confess
“Are actually images brought from the West
By my Warden, a craftsman like none in the world!”
And with a great laugh from his bag he unfurled
An ear of fine corn, and some oil from the East,
“My friend I have plenty, tonight we will feast
On all that is good! We are Masons, kind sir!”
A murmur went throughout the Lodge, quite a stir,
As presents and promises flew from his sack!,
A Mason, showed he had a knack
For making this Christmas the best you could glean,
And soon even Deacons were laughing, they’d seen
On this very night only happiness reigned!
This jolly Saint Nicholas quickly explained
That only a Mason could be so inclined
To make all kids happy, make all people find
A Christmas so special, yes, Santa was right!
Merry Christmas to all, and to all a good night!
With the Season’s Greetings to one and all