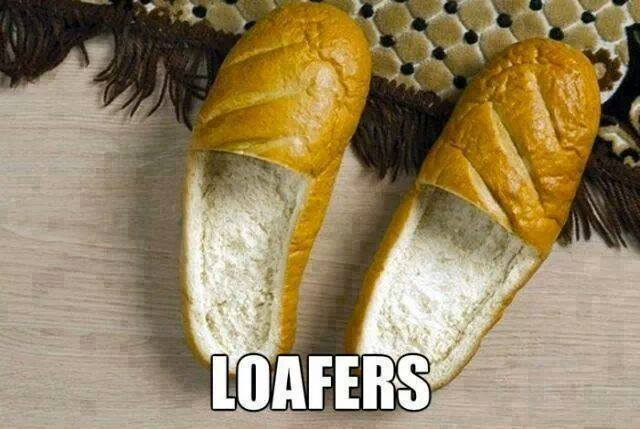 For a little Sunday Punday Funday, I give you.. the pièce de résistance of puns:

These loafers must have cost a lot of dough. They are shoes that most people would just loaf to have. You could make some bread selling these loafers. I believe it’s a product you could spread without getting into a financial jam.
Probably someone would knead them. They are perfect for standing in a bread line. They, also, come in handy at the beach because of the sand which is there. These loafers would be ideal for making FOOT long subs. These loafers would be very comfortable if they were laced with a special enhancing ingredient that might be pricey on a shoestring budget though. Hint, hint, nudge, nudge. These loafers may also be relaxing to wear but I can’t help thinking how crummy it would be if you did.

In Holland, people may well have been bread to wear clogs that look very much like the loafers in the picture.
When I saw the loafers image the yeast I could do was to be punny. If you’re stuck for a Xmas gift, you might consider a pair of these shoes as stuffing for stockings. It would also be a step to take stuffing a turkey with them.
I’m beginning to feel like a bit of a heel grinding the puns out but this image has such a foothold on me.
I would have to admit my brain was clogged with puns when I first saw this picture; I hope this doesn’t pan out to be a foot fetish. Oh my, what if some people think these loafer puns are stale. Would that amount to defeet?

No matter how you slice it you have to admit these are great puns; upper crust. However these puns in French might be considered a pain. Even if you are not pleased with some of these puns, try to go with the grain anyway; consider it as a step in the rye direction.